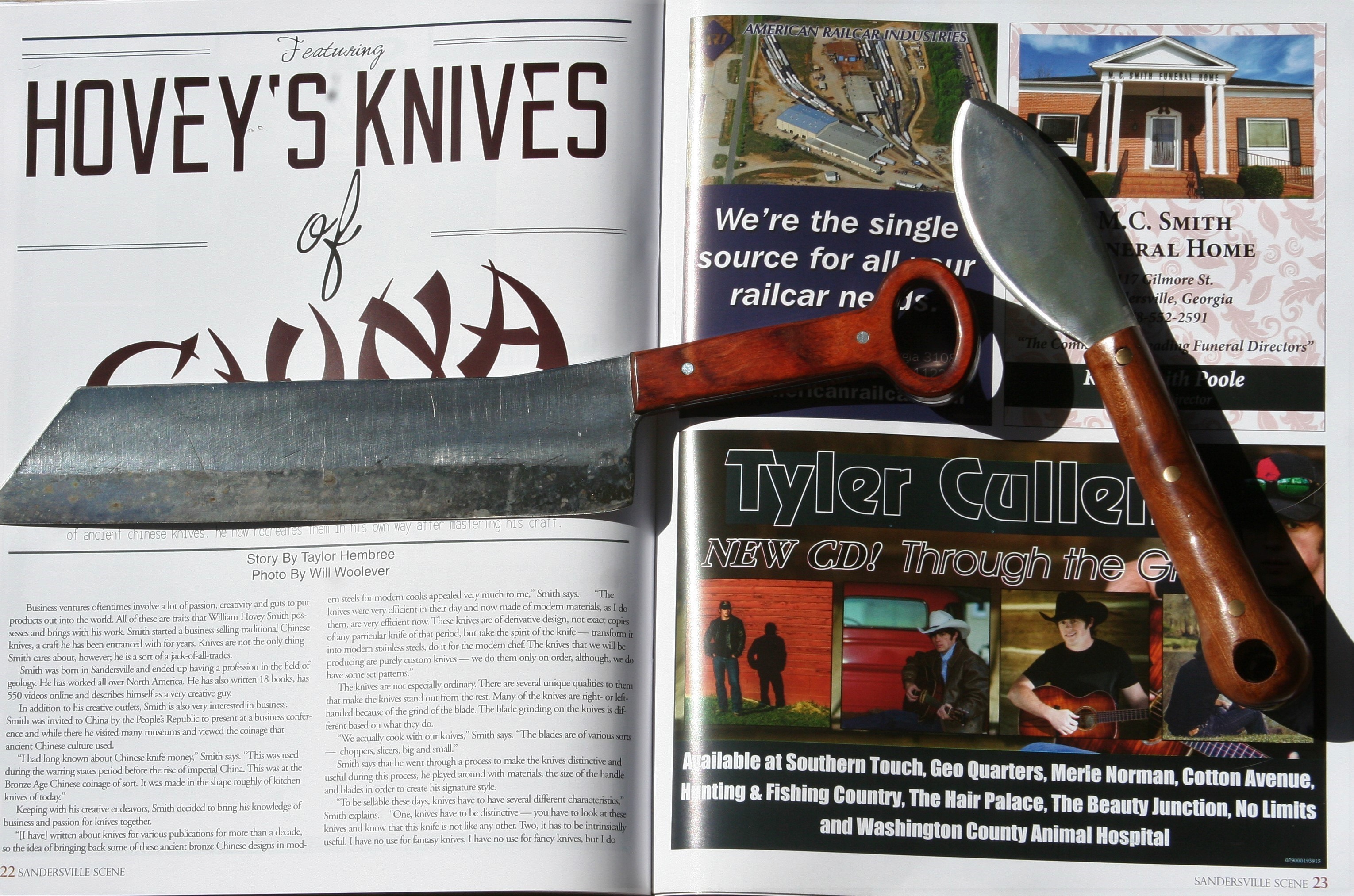 It is often said that, “a profit is not honored in his own land,” but in this instance I was when I was interviewed by Taylor Hembree for a story that ran in Summer Issue 1, 2017,  of the Sandersville Scene Magazine. This is a town promotional magazine published by The Union-Recorder news staff in nearby Milledgeville, Georgia. After the interview in Milledgeville, photographer Will Woolever visited my shop and took supporting photos for the feature. Many more photos were shot than published, and I have included some similar pictures to provide a more complete look at the knife-making process.

Hovey’s Knives of China offers three distinct services. The first is to make our original custom knives that are based on ancient patterns of cooking knives from China and other cultures. These are made in Sandersville by me and  bladesmith Paul Hjort. The second is to rebuilt old cooking knives so that they are again presentable enough so that Grandma’s knives can again be used in today ‘s kitchens and the third is to take found steels and salvaged woods from old homesteads and make useful cooking implements from them. Although the house may no longer be there, these tools become lasting, functional reminders of a once vibrant, but now long gone, rural family history.

Hembree included several quotes that I often use. One was how I first learned about the unique qualities of Chinese cooking knives through photos of the knife money, which were cast bronze pieces used as currency during the Waring States Period, before the rise of Imperial China. Another quote was, “These knives are derivative designs, not exact copies of any particular knife of that period, but take the spirit of the knife and transform with modern stainless steels into functional tools for the modern cook and chef.”

Perhaps the best expression of my philosophy of knife making in the article was, “To be sellable these days, knives have to have several different characteristics. One, knives have to be distinctive – you have to look at these knives and know that the knife is not like any other. Two, it has to be intrinsically useful. I have no use for fantasy knives, I have no use for fancy knives; but I do have great use for functional knives.”

I am also a believer in the proposition that the best kitchen knives are designed by those who use them. I am a recognized outdoor cook, and have recipes and common mentions on cooking game and fish in Backyard Deer Hunting, Crossbow Hunting, X-Treme Muzzleloading and Practical Bowfishing.  As an outdoor writer I have been publishing on knives for two decades, with many articles in national knife magazines. In 2015 I made two trips to China as a guest of the People’s Government as a presenter and attendee to international conferences. While there, I had a chance to visit museums and see some of their historic artifacts and cooking techniques.

Since the article was written, I have received several inquiries about knife making classes. I will offer a 2-day class where the student will make a knife of his choice under my supervision from materials that I will supply for $350 which includes meals and lodging if they are from out-of-town. For locals there will be a shop-time charge of $150 a day.

Photos that were used in connection with the article was one at me in the exterior portion of my shop grinding using an angle grinder to profile the blade of my Billy Joe Rubideoux Rib Chopper and another of  some of my knives and a plate of cut deer being guarded by Hera, my Yellow Lab-Sheppard mix.  A more complete selection of photos appears below.